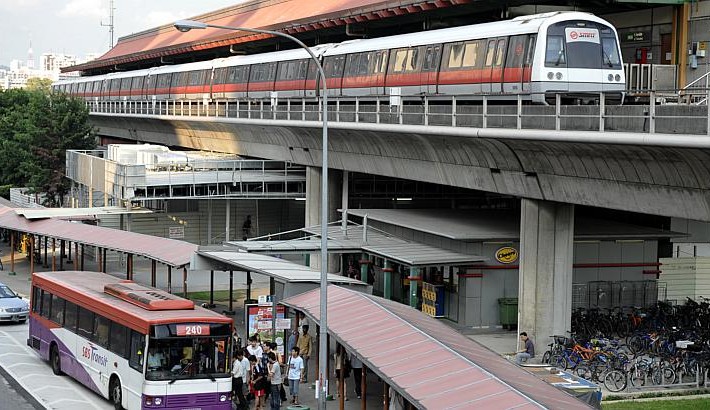 Earlier this month, Singaporeans were taken aback when we were told by the Public Transport Council (PTC) that there will be a fare hike of 2.8 per cent in April 2015. It was no surprise that it was met with public outcry when the fare adjustment did not tally with the price of crude oil which has plummeted from $110 a barrel to $45 a barrel. Gas price has in fact fallen for a record of 17 consecutive weeks as at the time of writing.

The reason that there was a increase in fare prices despite falling oil prices was because of a remaining 3.4 per cent that was rolled over from last year fare’s adjustment. Last year, fare should increase by 6.6 per cent but because implementing the full fare hike may significantly increases the expenses of an average household, the fare only went up 3.2 per cent. This year fare adjustment has in fact went down by 0.6 per cent due to lower energy cost which explained why overall there was still a 2.8 per cent increase.

The question that we may be asking is whether the increase is justifiable after taking into account various factors such as wage level, inflation rate and energy cost – the metrics used in the fare formula.

We shall look at some of the reasons that Singaporeans has voiced out.

The most recent delay happened two days ago:

[NSL]: Estimate 20 mins additional travelling time from #Sembawang to #YioChuKang towards MarinaBay due to track fault.

The benefits of privatisation has not been materialised
It was believed that privatization would lead to improve efficiency and thus reduce costs. With a profit motive, transport operators will aim to innovate and be efficient in their operations. This will in turn lead to cost reduction and savings can then be passed on to the commuters.

Unfortunately this has not been the case in Singapore when the duopolistic nature of our transport system has not made our two PTOs competitive. With no overlapping of routes and a industry with a high barrier of entry, PTOs see no need to compete with each others for profits and market share. Moreover, Singaporeans also depends heavily on MRT and buses for commuting and one would fail to see how this will lead to innovation from our PTOs.

For bus services, it is clear that being privately managed does not equate to a more efficient outcome as government intervention is needed to expand the number of buses and thus improving connectivity and better service level. This is evident when the government has implemented a $1.1 billion Bus Service Enhancement Programme (BSEP) in 2012.

What about other countries? Take the British Rail for example. Railway companies in Britain had been self sufficient prior to privatisation by the government of John Major. Now Britain’s Railways are one of the most expensive in the World despite receiving four times more in taxpayers’ subsidies than a state-owned British Rail.

In fact, 60 per cent of the British have voted in favour of a public railway as they feel that it should be accountable to taxpayers than the the shareholders.

Comparison to Hong Kong’s MTR and Taiwan’s Metro
Hong Kong’s MTR boasts a 99.9% on-time rate for many years and is even looking at running operations in other parts of the World in Europe, Australia and other parts of Asia.
For the NSWEL performance against LTA’s Operating Performance Standards, train arrival punctuality has went south for a consecutive of 5 years.

Hong Kong’s MTR has also moves close to 5 million passengers a day compared to 2.5 million in Singapore, but surprisingly the frequencies and punctuality of the Hong Kong’s MTRs has managed the crowd during peak hour so well that you hardly see the crowded and congested platforms in Singapore. 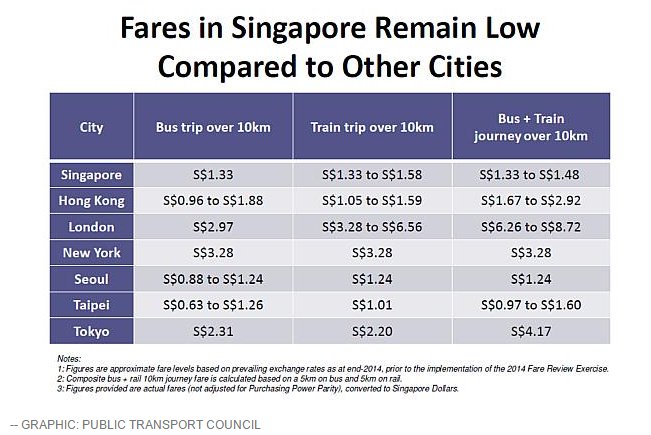 Have i missed out that you can also get free WIFI at every stations in Hong Kong’s MTR, Taiwan’s Metro and even the Seoul’s Subway? Though Singapore has only recently started to offer free WIFI in selected stations, one may only wonder why we are lagging behind the rest of the Asian Tigers.

Public transport as a merit good
Public transport is considered as a merit goods and in Singapore where land is scarce, the role of MRT and buses help to reduce private vehicles ownership and thus reduce road congestion. By increasing fares when prices of fuel and COE are decreasing, are Singaporeans getting the wrong signal that one should consider owning a private vehicle? For the extra comfort and convenience, it would be no surprise to see more people choosing car as their mode of transport.

Moreover, another benefit of public transport is that it reduces pollution as less vehicle on the roads would also means less air pollutants emitted to the atmosphere. This generally leads to a better quality of living with healthier individuals.

Less taxpayer’s money is also spent on infrastructure costs such as building more expressways, expanding roads and increasing parking lots which could have been better used to improve and subsidise healthcare costs.

The truth is taxpayers and majority of the people have no interest in SMRT or SBST. Whether the PTOs are making a dollar today or a million dollar tomorrow, unless you are its employee or shareholder, it hardly matters. What commuters are concerned about is how fares adjustment will affect them and their standard of living.

Critics may argue that profits are dwindling for the past few years due to increasing operating costs. The decline in profits is evident in the chart below. 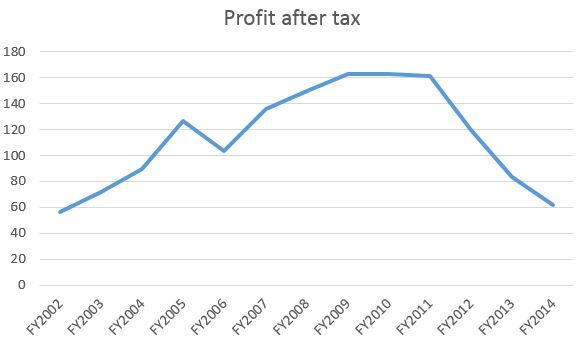 As one may have expected after the spate of disruptions in 2011, we expect the transport operator to step up on improving its ageing trains and tracks. 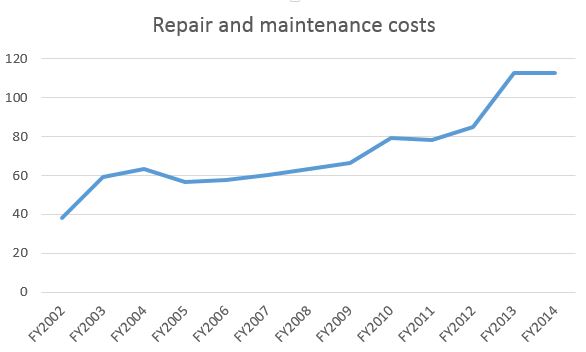 Staff and related costs also increased because of the need to hire more staff to handle the increased ridership in MRT and buses. 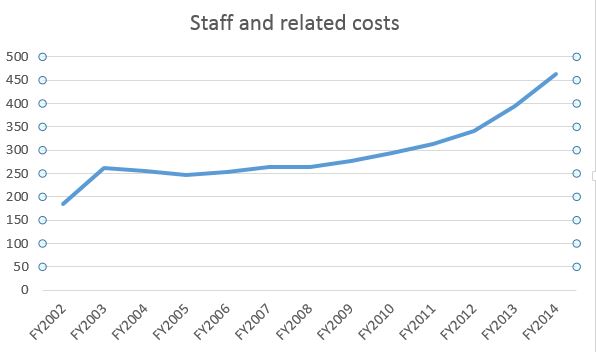 From the charts above, one can see that profits has climbed sharply from 2002 to 2009 while the costs has been relatively flat for the same time period. What does this tell you? One would expect the profits to soar to a high of $162.9 million in FY2010. Were the amount allocated to repairs and maintenance sufficient to keep our trains moving with minimal disruptions? The Attorney-General’s Chambers (AGC) don’t think so.

What about staff and related costs? It’s realistic to say that Singapore’s population has been increasing every year and this would thus lead to increased ridership. It is surprising to see that staff and related costs have been rather stagnant before FY2009. It is no wonder that during these period, Singaporeans were complaining about congested trains and buses and the long wait for buses on certain routes and the need for the government to implement BSEP.

The achievement would have been commendable if some of these gains were passed on to the commuters as cost savings and not as dividends to shareholders. Ideally, in a nationalised transport system, these profits would have been reinvested to improve the standard, increase reliability and keep fares affordable.

Now ask yourself if the benefits of a better, cheaper and more reliable public transport has been realised? Has the increased profitabilty of privately owned transports translated to better services?

The principle for setting fares was clear. Fares will be kept as low as possible, consisted with collecting enough revenue to meet the running costs of the MRT, replace parts and equipment regularly and provide company shareholders a reasonable return. – Transport Minister Yeo Ning Hong, 9 July 1986 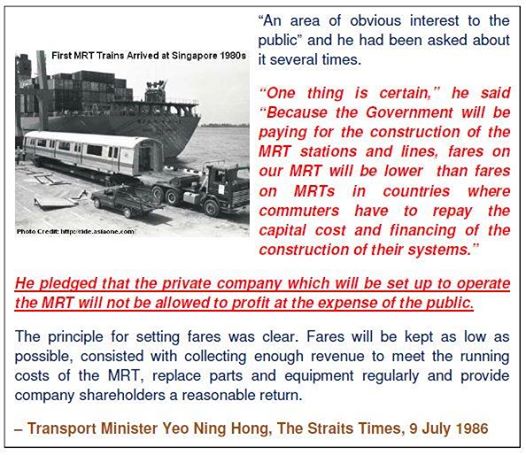 What’s your view on the fare increase? Is the fare adjustment, a fair one? Share your thoughts with us.