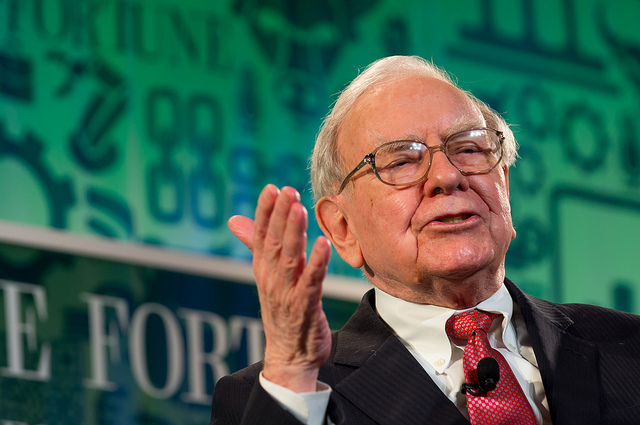 The ‘Oracle of Omaha’ invests like no other – successfully. He isn’t a fierce and aggressive investor though, rather a calculative and risk-free businessmen. One might question the kind of companies he invests in, but his methods are clean, careful and even somewhat conservative. Warren Buffett ranks with currently 71.6 billion US dollar among the wealthiest individuals in the world. Born to a Congressman in Nebraska, he made his first money selling chewing gum. More than half a century later he is the CEO of Berkshire Hathaway, an American multinational conglomerate holding company.

Many young businessmen continuously seek advice and answers to how he made such a large amount of money. The answers are rather simple and surprising. Unlike the risky investors one has increasingly encountered in the last decades, he hardly ever makes a rush and not-thought-through investment. Furthermore, he isn’t bothered by the market or other investors, which is probably one of his biggest strengths.

Although he reads up to five different newspapers everyday, the daily fluctuations of the stock exchange don’t influence his decisions. His attitude towards investments is different compared to most modern investors. The daily numbers on Wall Street can often cause a frenzy of hasty buying and selling of shares. Warren Buffett considers his investments to be long-term. Romanticising his approach, one could say he is ‘old school’. When Buffet bought his first shares half a century ago, the average time for holding a share was more than a month. Nowadays, this average has dropped to scary 22 seconds. Considering that a share represents a part of company, one could say 22 seconds isn’t really an investment in anything.

He credo is to invest in what he knows. There isn’t a chance he buys shares worth millions of dollars from a company that he doesn’t entirely understand. He does his homework and buys shares as if he was buying the entire business. This investment is not based on the fluctuation of the share, but rather on long-term interests in the company. One could actually argue that Buffett’s categories are extremely conservative. When considering an investment, he questions whether the company is simple and understandable, has a positive operational history and if there is a favourable future for the business.

This strategy isn’t flexible at all, but safe and sound. Warren Buffett is known for not being irritable by the market. His holding company for example owns significant parts of Coca Cola, American Express and IBM – companies that are consistently successful.

Another strength of his is his sense of realism. He knows that it is impossible to predict the day-to-day movements of the market and therefore the direction of the economy. Most investors try to form a package of shares and investments that will be beneficial with their predicted direction of the market. However, this always includes a risk. If the prediction isn’t entirely correct, not all shares will be profitable. Buffett’s investments are outside of these predictions. He understands that he cannot, despite his vast influence and financial power, control and continuously predict the economy. He therefore only invests in businesses that are superior to these fluctuations. There are certain businesses that always will prosper and generate revenue – such as Coca Cola and IBM.

The simple principle behind Buffett’s strategies isn’t to minimise risk, but to eliminate risk in the first place. He was famously quoted saying that the stock market doesn’t really exist for him. It is only there to see if anyone offers anything foolish, he said. This exemplifies his attitude towards the daily swings of the market that most investors are influenced by – he ignores them completely.

It isn’t intelligible for him to invest in a company that he doesn’t understand and whose business isn’t transparent. Modern day trading on the stock market is mainly based on sudden impulses and spontaneous movements of the shares. Investors, buyers and traders, for the most part, no longer look at the company and its values, but rather at their day-to-day performance. As Warren Buffett tends to do long-term investments, he does exactly the opposite.

He is convinced that taking a risk with certain shares is never a good idea, as he equals a risk with not knowing. Why invest in something that you are not sure off? That is exactly his credo. No investment should be made, unless there is certainty. Once the latter is guaranteed, one can even make a heavy investment. Modern day trading is often compared to gambling at the casino. Surely, it often seems that way. False investments cannot only cause a heavy damage, but can create a ripple effect if the investment was made with borrowed money.

Warren Buffett chooses not to gamble, but place his money on the safe side. Why would you bet on black, if you know it is going to be red? Buffett might invest conservatively, but therefore only does so whenever he is sure of profit and convinced of the company itself.

One might ask, how he knows which shares and companies will be prosperous and safe. Buffett does he research. He might not be influenced by the daily fluctuations, but he does his homework concerning financial news and business developments. Once he makes an investment in a company, he usually buys a huge quantity of shares and keeps it. Many investors don’t keep shares, as the cash flow might stagnate. Warren Buffett has a certain funding, which he can easily invest without having to worry about accessibility of funds. However, also he has started small. His earnings on the market did not instantly rocket into the millions.

Warren Buffett might posses 71.7 Billion US Dollar, but also he has started small. He has made his first billion only in 1990. Considering he has then already been trading for over thirty years, one understands that consistency and persistency are part of his success. It is, however, difficult to apply all his tactics. Around 60 Billion US Dollar of cash pool allow him and his company to move quickly like no other investor, if necessary. Hence, his principles and attitude are admirable, but if one aspires to be the next Warren Buffett, one should make some time.