Honestly speaking, while ‘The White Tiger’ has ranked its way on top 10 of Netflix’s film list… I’m not a fervent fan of it. But that’s just my personal opinion.

On one side, we’re happy that Balram broke free from his master and saw the light at the end of his tunnel. But on the other hand, we can’t seem to condone his behaviour and the choices he made. 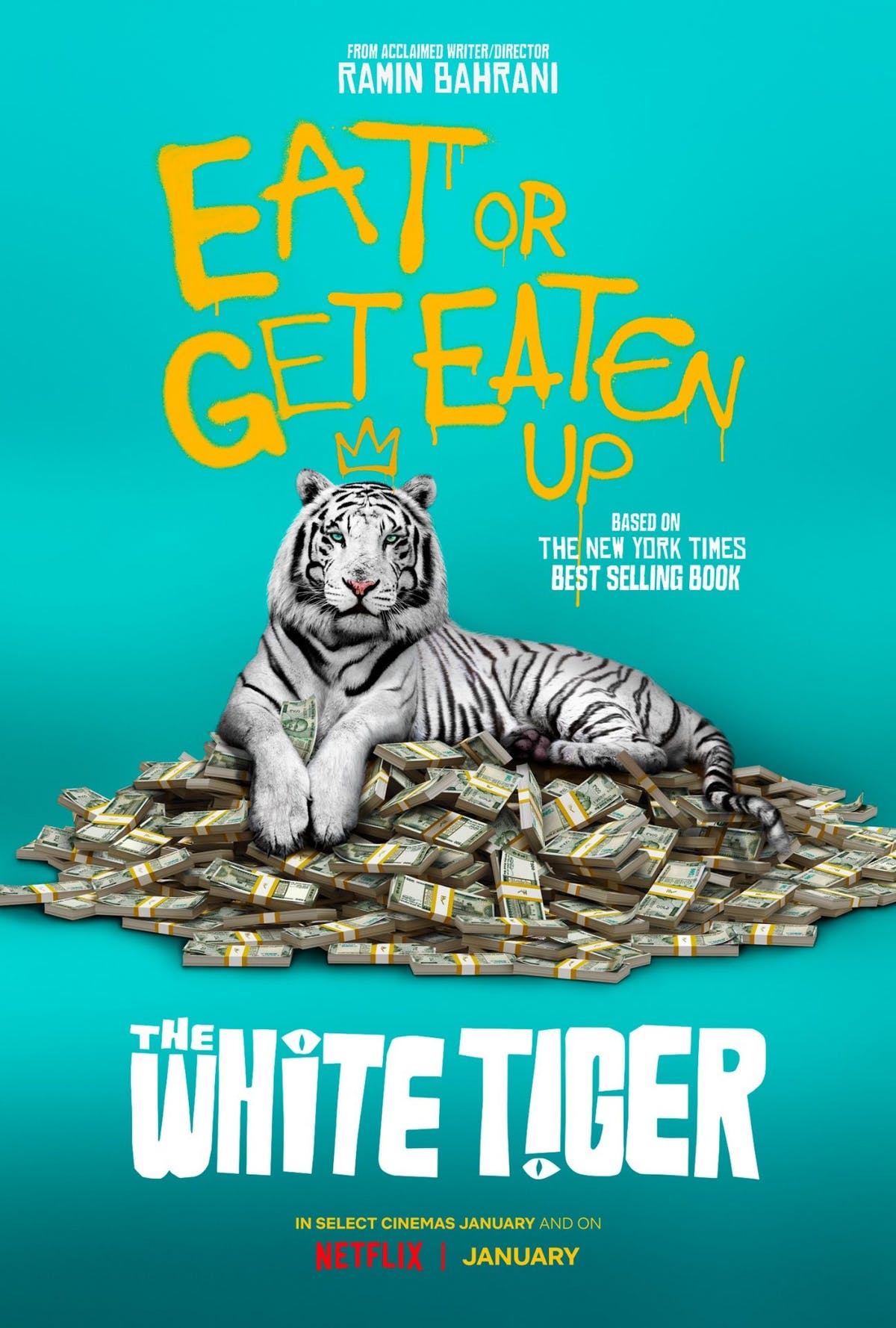 With that said, though we’re sitting on the fence on this 2021 film that’s currently showing on Netflix, there are powerful messages to learn and apply in real life from ‘The White Tiger’.

Here’s our take on it.

#1: Poverty should not be a hindrance to one’s success

Just a few minutes into the opening, ‘The White Tiger’ opens with a weighty message. That is, “Any poor boy in any forgotten village can grow up to become the prime minister of India.” Yes, poverty sucks big time, but not being rich should not be a barrier to one’s hope and dream for success.

#2: Tap onto every opportunity to listen and learn

Balram shared that he had learned to use his time wisely to eavesdrop on customers, hoping to gain an opportunity. While eavesdropping isn’t that polite, it doesn’t hurt to tap on opportunities to listen from your neighbours and gain some insights. You never know when an opportunity will present itself.

Balram could have settled contentedly with his brother in the poor village. But instead, his target for better prospects led him to the desire for upskilling. Instead of saying, “I can’t drive so this job is not for me,” he asked his granny for 300 rupees (S$5.47) to go for driving lessons with aims to secure a better paying job.

Isn’t this just so true about life in general? Whether it’s in relationships or the economy, there are only two destinies. You either eat to your fill and prosper to greater heights or get eaten up by your co-workers who step on you to rise to the top. You hold the power to write your fate!

When we say know your competition, we mean to be well aware of it. Especially to those thinking of starting their own business or entrepreneurs who are at an early stage running their start-up, this is some wise advice you ought to take. Being up to date with what’s happening within your industry can steer your business strategy towards success.

#6: Women should speak up for themselves

We know it’s the 21st century, but women still face discrimination in certain countries and cultures. Ladies, if a man ever tells you that you belong at home and have no place in a man’s discussion, speak up. There is no way you should let a person belittle you like that.

Do you remember the first time or a situation where you were desperate for some kind words? “You’ll figure it out. Don’t worry,” was what Ashok told Balram in ‘The White Tiger’. This was after Mukesh slapped Balram on the head after he missed the exit. Don’t underestimate these simple words to a friend or colleague. You might touch them in unexpected ways beyond your imagination.

It’s common for start-ups to come up with a business plan. Well, it helps to have a clear vision for the way forward and a written document to follow if there are hurdles along the way. But do you know that it’s not always necessary? Instead of wasting time on a start-up business plan, you want to do these five things instead.

#9: Spend some time in reflection

Reflections are not only for the end of the year. It doesn’t harm anyone to do a review at any point in their lives. Asking yourself questions such as “What is it that I want to do?” can direct you to a decision you might not have thought about it before. Is it a business idea you’ve been putting on hold for some time? Or a new field you’re looking to enter? Take actionable steps to achieve it in 2021.

#10: Stop searching for the key when the door is open

Balram thought he heard Pinky said to him, “You were looking for the key for years, but the door was always open.” Putting this in life’s context, do you find yourself searching for the key to open a particular door? While being stuck in this tiresome rat race, maybe you already hold the ability to unlock new opportunities. The question is, are you allowing yourself to?

#11: The early bird catches the worm

We bet all Chinese-educated peeps have heard of the phrase, “早起的鸟儿有虫吃”. When translated to English, it simply refers to how the early bird catches the worm for food. To put it in another way, it benefits one to be early in grabbing onto a chance when others are still deep in their slumber. So are you the former or the latter?

#12: Beware of yielding to temptation

When temptation knocks at the door, learn to walk away. A little moment of interest in that “red bag” will grow into an idea, and that action of folly will lead to possible regrets down the road. You will start justifying your actions as right and look for ways to continue indulging in that little secret you want to hide from the world.

We think young people should watch ‘The White Tiger’ with discernment. Robbing someone to break away from poverty and gaining monetary freedom is not morally right.

We shan’t spoil it any further for those who’ve yet to watch the film but have read up till this point. Let us know your thoughts on the ending after you’re done with your two hours?

Powerful messages from ‘The White Tiger’ we can apply in real life was last modified: January 31st, 2021 by Celeste L.