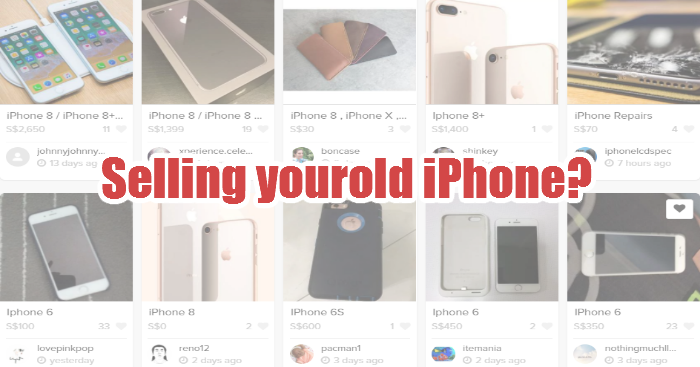 SINGAPORE, MONDAY 25 SEPTEMBER 2017 – Now that the iPhone X is straying perilously close to costing an actual kidney, trading in your old iPhone to help defray the cost of a new one is a more popular option than ever. But because the market has a tendency to push prices down when there are more people looking to sell their old iPhones (a well-observed economic principle – price goes down when supply goes up), you wouldn’t know if the trade-in price offered at your telco or handphone shop is a good deal or not.

To help you avoid rip-offs, we asked everyone’s favourite online marketplace Carousell what your soon-to-be-replaced iPhone is worth on the second-hand market. Here’s what we found out.

What Do the Numbers Mean?

We apologise for triggering all the traumatic flashbacks of Statistics class you’re probably suffering right now. We wanted to make sure we dealt in scientific data, and not simply hearsay from a lazy walkabout at Tanjong Pagar Plaza. Quick explanation: The median price represents the midway point of each model’s price range. So in the case of the iPhone 7, 50% of all handsets were sold for more than S$820, and 50%, less than that. How much higher or lower? For that, we look at the numbers in the next two columns to the right. These give us a good idea of what low and high prices look like for that particular model. They do not represent the absolute lowest nor highest prices for each model. So, putting it all together: If you get offered S$800 for your iPhone 7, that’s a bit on the low side. S$850 to S$950 would be an ok price, and you shouldn’t hesitate to take any offers coming in at S$1,000 or more.

Eyeballing the figures from Carousell, you can see that the value of your old iPhone suffers a dramatic decline after one generation. As at September 2017, an iPhone 7 commands a respectable median price. You’ll also notice that the spread between prices is still relatively tight.

But when it comes to an iPhone 6, the median price plunges by more than half. And it gets worse as we go down the ladder to older iPhone models, but you were probably expecting it anyway.

The actual price you will get for selling your old device will depend on a number of factors. Chief of these is the condition your handset is in. “While little scratches and scuffs aren’t deal-breakers – many of our users are upfront about these details and still successful in their sales – people will generally prefer and will pay more for iPhones in the best possible condition,” says Lucas Ngoo, Co-founder and CTO of Carousell. As you’d expect, a perfectly working model with all its original parts intact will fetch a higher price than one that had undergone part replacements. (Think about how damaged the internal circuitry must be after going through at shocks serious enough to shatter the screen.) If you can provide the original box and accessories (such as charging cable and adapter, and never-been-worn headphones) you can probably command top prices. And, because this is Apple we’re talking about, you can expect to charge a little higher for devices with larger storage.

Is it Worth Selling Your Old iPhone?

At this point, you may be wondering if it is even worth selling your old iPhone. The answer is: yes, especially if it’s the latest model. As Carousell’s data show, the iPhone 7 is trading hands at prices near to those of a brand-new set direct from the Apple store. This is probably as good as it gets. But even if all you have is an iPhone 6 or earlier, you can still sell it off and use the money to pay for other things you need or want. For example, while the S$60 you’ll get for selling your iPhone 4 puts nary a dent in what you have to pay for the iPhone X, you could still get a decent pair of shoes for it, or a new computer game.

A Result of Planned Obsolescence?

In case you’re not familiar with the term, planned obsolescence is an actual thing that manufacturers are doing. Basically, the products we buy are designed to last only up to a certain period. Beyond that, they are expected to fail. This practice corrals consumers onto a schedule for replacing the things that we’ve come to rely on. And it’s not just consumer electronics, car or light bulbs either. When it comes to iPhones, the message seems to be: keep up with Apple’s schedule; it’s the most rewarding way to enjoy their products. Especially in light of the record-breaking price of the iPhone X.

This article first appeared on SingSaver.com.sg.

Here’s how much you may get when you sell your old iPhone to pay for the iPhone X was last modified: October 8th, 2017 by MoneyDigest